We left La Paz on a night bus to Uyuni. Waking up to the view of, well, not much really, made me realise what a remote part of the world we were travelling to. Another four hours of driving through a barren landscape saw us arriving at our hotel in time for breakfast and a shower. Uyuni was like a ghost town, cold, yet bathed in glorious sunshine and the bluest sky I’ve ever seen.

After picking up a few supplies we set off later that day in a convoy of 4x4s to explore the salt flats, but not before an obligatory visit to the train cemetery. The eerie, rusted remains of the mining industry have been exposed to the harsh elements of this cold desert for almost 80 years. A museum, a playground and a blank canvas for graffiti artists, I could have spent hours wandering around and snapping away. 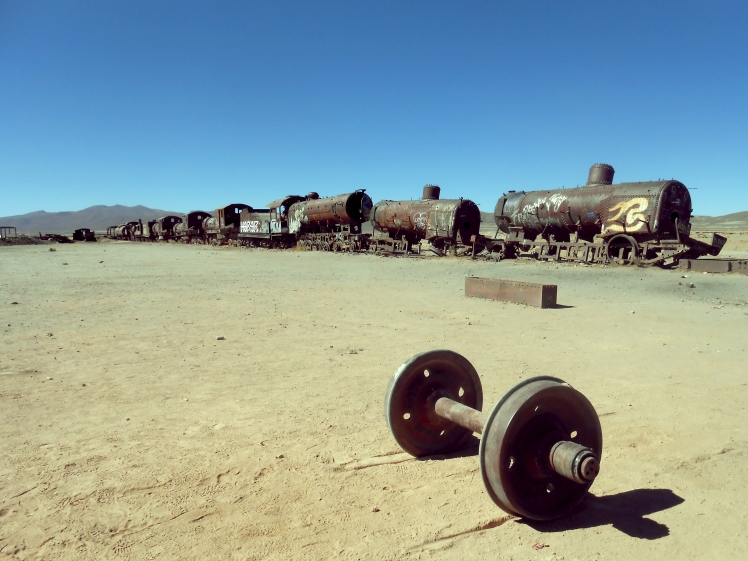 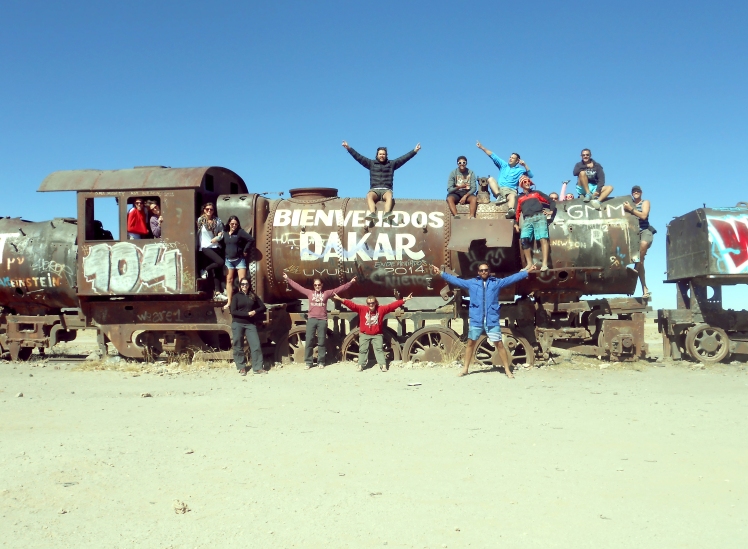 I shared my 4×4 with three Australian guys who I knew were way too cool for me! They were loud and brash, but great fun and they absolutely took me under their wing and we had a brilliant time. The whole group would become like a family over the course of the next three weeks, the real bonding happened in the toughest of circumstances, sharing experiences—both good and bad—that I’ll never forget. 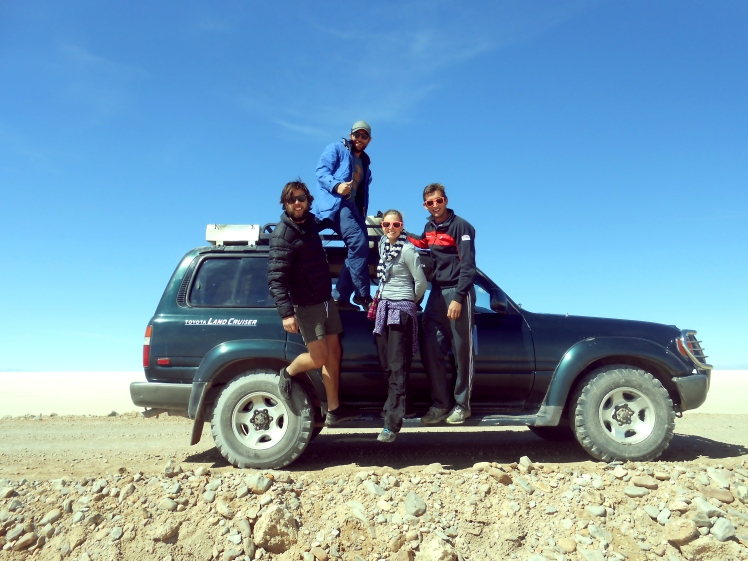 Venturing out onto the salt flats, again I realised how far we were from civilisation and what an incredible and vast landscape we were about to explore. We could literally see for miles around and there was not so much as a rock interrupting the view. How the drivers navigate it is beyond me.

Of course, it is this sheer vastness and the skewed perspective that makes for some creative and sometimes hilarious photo opportunities! Because everyone wants that shot of them being chased by Godzilla!

The temperature dropped drastically when the sun began to go down. The eco lodges where we were staying had no heating other than a woodburning stove in the communal seating area. Our favoured option was to huddle together, drinking beer and playing cards until we were tired enough to fall asleep despite the cold.

After a modest breakfast, we took off to visit Isla Incahuasi (Cactus Island), the remains of an ancient volcano that was all but submerged when the whole area was a giant lake. It was a surprise to see such a lively display of colour in the middle of this white desert and another set of excellent photo opportunities awaited us there! 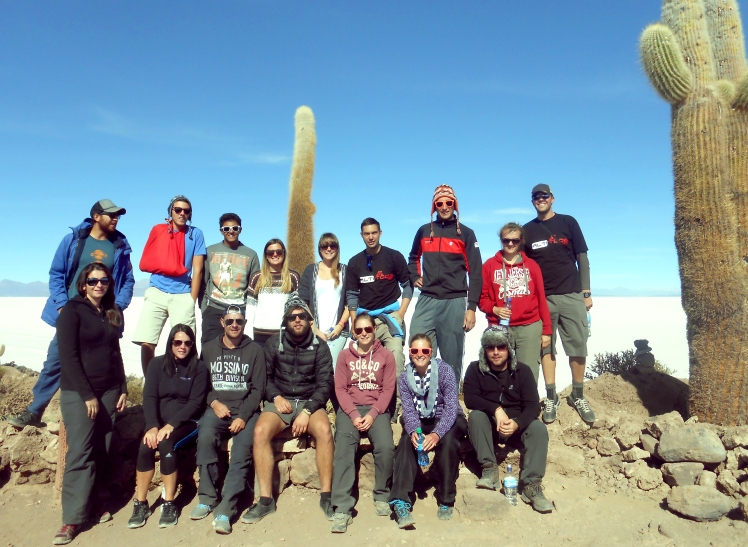 Our next stop was the flamingo-filled Laguna Colorada (Red Lagoon) which certainly lived up to its name and added yet another injection of colour to the landscape. 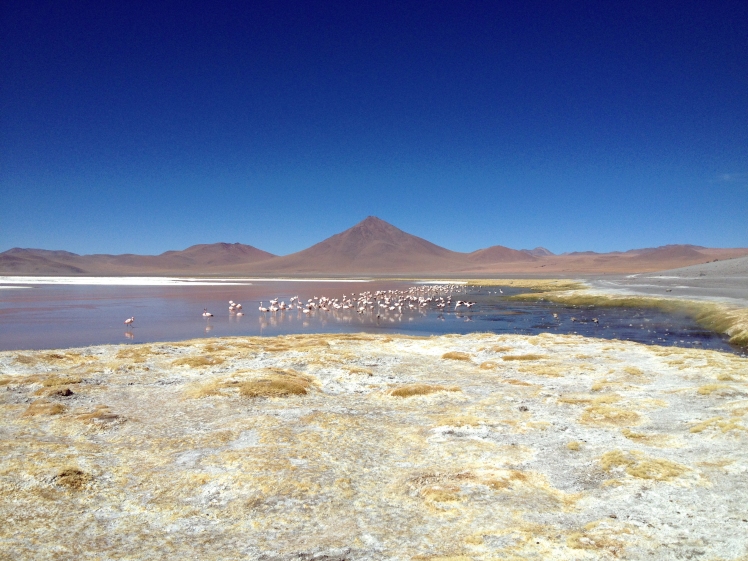 Everything I saw in those few days could have led me to believe I was on another planet; the terrain, the otherworldly colours, the absence of most forms of life. I had never experienced anything colder than -5 until one night the temperature sank to -20 in our unheated accommodation. This is why nothing lives there! The sky was completely clear and I braved the outside world for a few minutes to gaze at the stars in their millions, more stars than sky.

On our return to Uyuni we went out for one of the best meals I’d had in weeks at a busy pizza restaurant, followed by an evening of drinking at the fabulously named Extreme Fun Pub. I’m sure every backpacker who’s travelled to Uyuni knows it and more than likely has their photograph on the wall. This tiny bar plays host to one of the most ridiculous and, well, extreme drinking games I’ve ever come across: ten different drinks, shots and concoctions in ten different drinking vessels to be consumed within the shortest amount of time. It can be tackled solo or as a pair and they even provide a toilet next to the bar should you need to use it during or after.

Needless to say that pride took over and we bore witness to England vs Australia as four of the boys embraced the challenge. I can happily announce that England emerged victorious and everyone survived relatively unscathed ☺

The next destination on our Bolivian adventure was Potosí, the world’s second highest city at over 4,000m above sea level. It was also the location of one of the most bizarre “tours” I’ve ever been on, the old silver mine.

Donning overalls, boots and hard hats, we were led around the factory where silver is extracted from the rocks by a man who I could only assume had chewed on a few too many coca leaves in his life. He was absolutely bonkers! With zero regard to health and safety (aside from the new outfits we’d been issued) he proceeded to smear sludge on our faces and drove us to a market where we could purchase “gifts” for the miners such as dynamite, coca leaves and cocoroco—the local fire-water with 96% alcohol content—before leading us down a mine shaft into the heart of Cerro Rico (Rich Mountain).

At over 4,200m altitude, breathing was a struggle anyway, so the added complication of a very enclosed space where we even had to crawl in places, wasn’t exactly a welcome one. Stopping off at a statue of El Tío (Lord of the Underworld), our guide generously doused him in cocoroco as an offering before lighting up a cigarette while he told us stories from the mines. 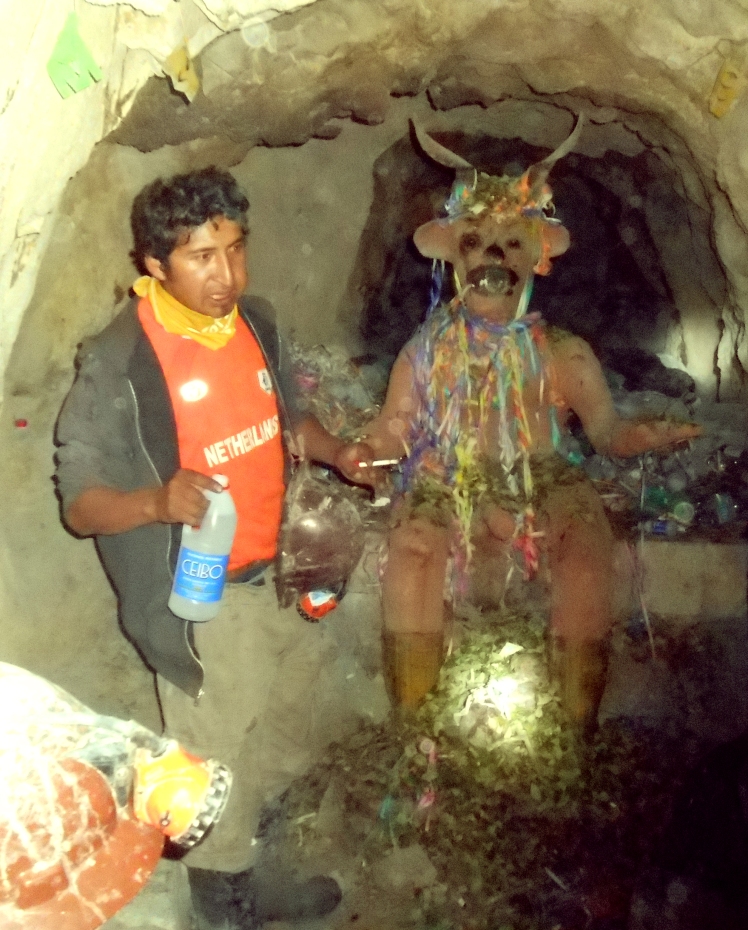 Having survived that surreal experience, the following day I took a walk around the centre, including up on the roof (literally) of the cathedral from where there was a fantastic view of the city.

One thought on “An Inhospitable Beauty – Salar de Uyuni and Potosí”