After five relaxing nights at the lakes it was time for me to head south and venture to the Cinque Terre coast. To break up the long drive I stopped in Melegnano, just south of Milan, to have lunch with an Italian friend who I met while travelling in Australia. It was so nice to visit a non-tourist town with a local. He showed me around, translated the menu for me and bought me an ice cream and a traditional cake from the town. From there I took the scenic route to Levanto, which took a little longer than expected, but the roads were just incredible! I would have loved to have my bike there! It was eerily misty, like being up in the clouds, and many of the houses and villages I passed looked abandoned.

On arrival in Levanto it was just beginning to get dark and the first campsite I tried was full. I wasn’t surprised, it was right by the sea and looked amazing, but luckily I found a spot in a smaller site nearer to the station. I was so excited to visit the Cinque Terre villages the following day and the weather was looking great, so I had an early night ready for an early start. 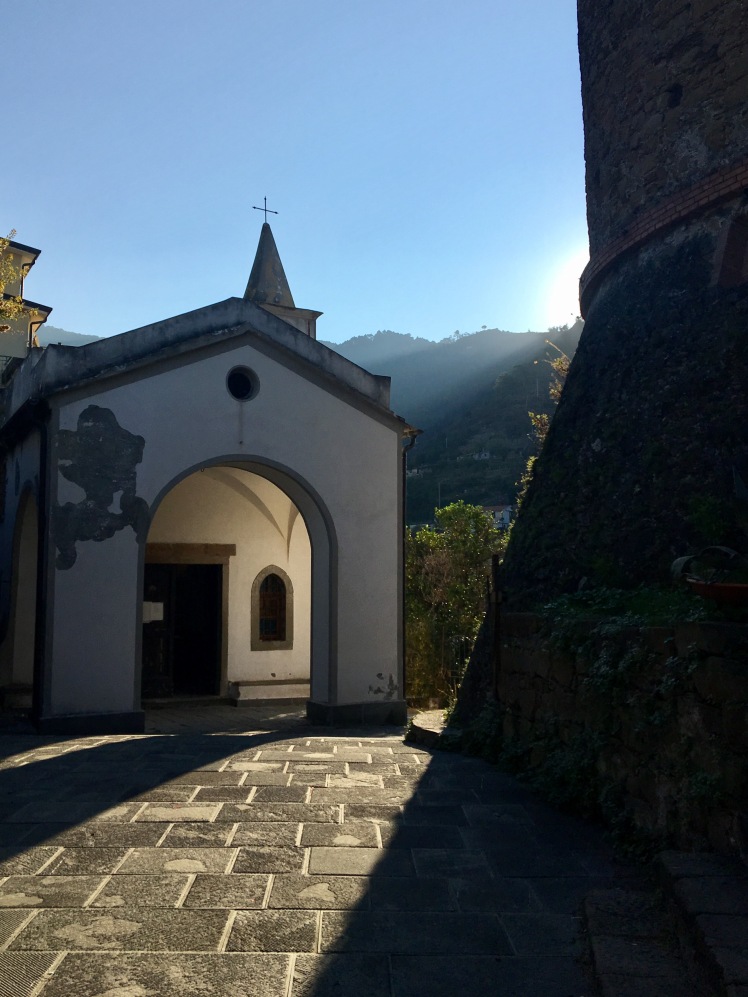 I took the train to Riomaggiore at the furthest end so I could work my way back. As it was quite early in the morning, the sun was only just coming up over the hills and people were still waking up. The streets were fairly quiet and I found myself meandering along backstreets and up hidden stairways, just a few feet from people’s front doors.

I started hiking up one of the many trails leading out into the hills, but decided I wouldn’t have time to do it justice, so headed back down into the town to catch the train to the next village along, Manarola. 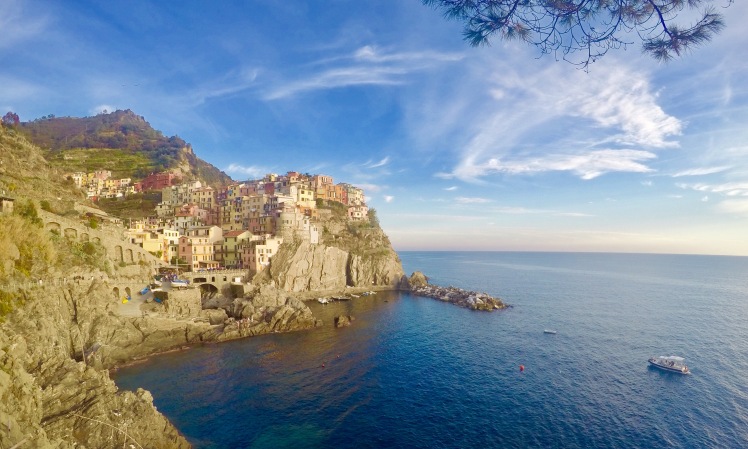 This place really captured my imagination with its colourful, haphazard buildings perched on cliff edges. In the harbour people were jumping off rocks into the sea, sunbathing, eating and drinking. I walked up to the top of the village and found perhaps the most photographed cat in town, sleeping under the clock tower. I bought some delicious vegetarian pasta to take away and took it back down to the harbour to eat. Everyone here was so happy, the harbour was bathed in glorious sunshine and I felt very much at home. 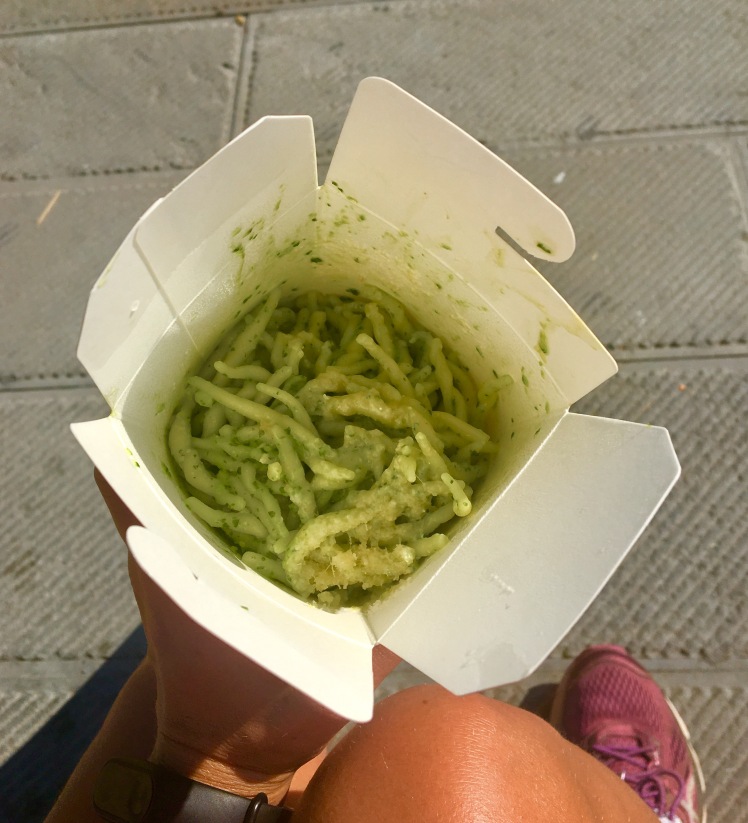 I started to walk along the coastal path to Corniglia, but it was closed due to damage caused by flooding in 2011. Sadly, this is the case for many of the coastal paths in the area. The sea looked so beautiful and I found a quiet spot, so decided to jump off the jetty wall for a quick and refreshing swim. It was very liberating just being able to do that because I felt like it, and I was able to see the coastline from a completely different angle. I really should live nearer to the sea…in a much warmer country! 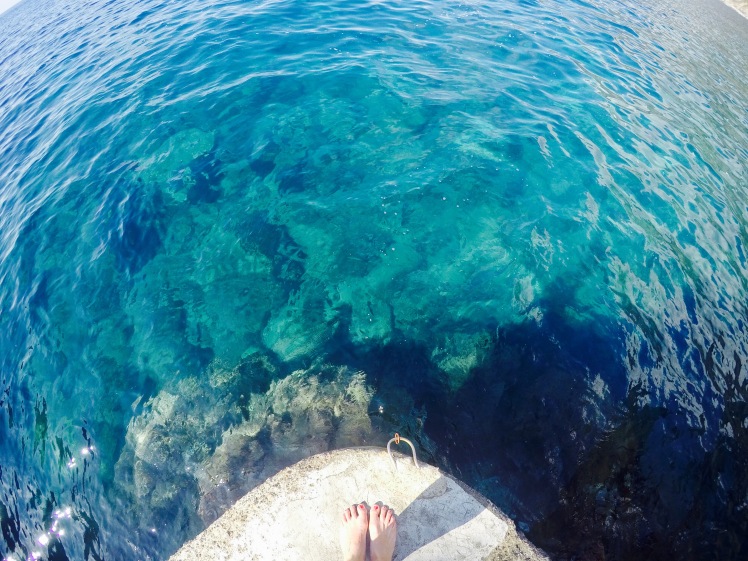 After drying off, I hopped back on the train to Corniglia and walked up the Scalinata Lardarina (a staircase of 382 steps) from the station to the clifftop village. I was at least rewarded at the top with breathtaking views of all four of the other villages and an ice cream, obviously. I walked down the steps on the other side of the village to reach the sea where I sat on the rocks sunbathing and watching people swimming and jumping off the rocks. 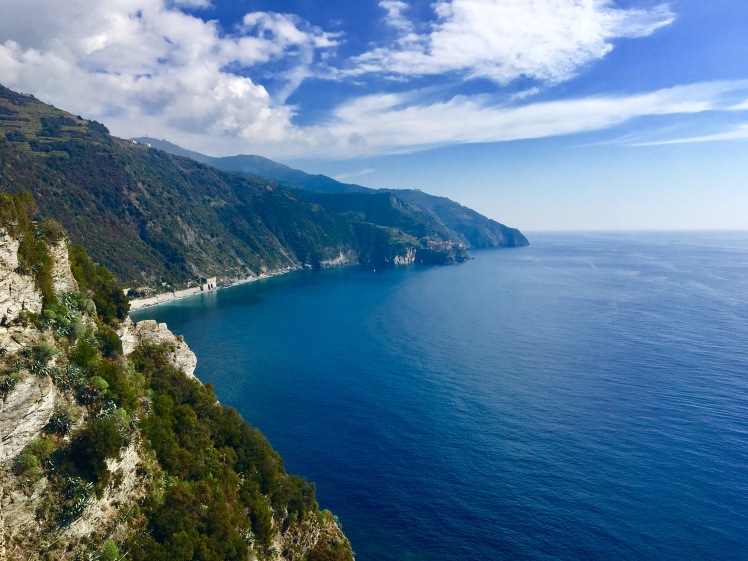 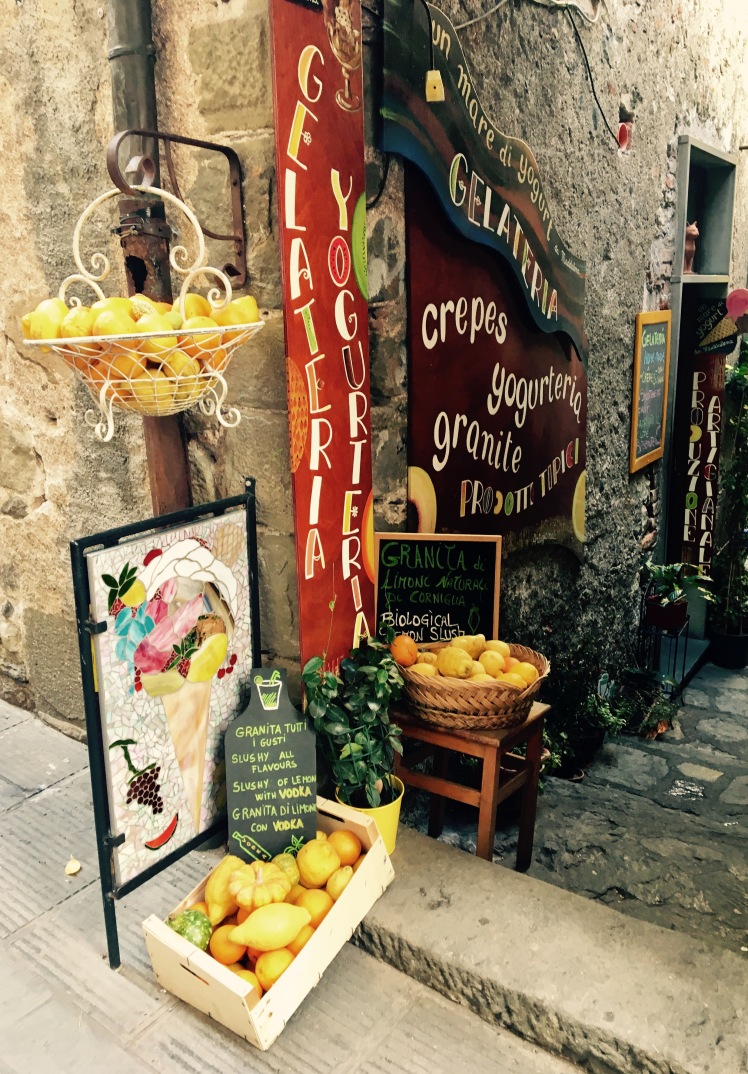 The only part of the coastal path that is still open for hiking is the one between Corniglia and Vernazza, so I climbed back up the steps and went to find the start of the trail. It was the hottest part of the day and the route was busy, but I’m so glad that I chose to walk it as the views were stunning. This is an extremely photogenic part of the world and I definitely made the most of every opportunity by taking too many photos. 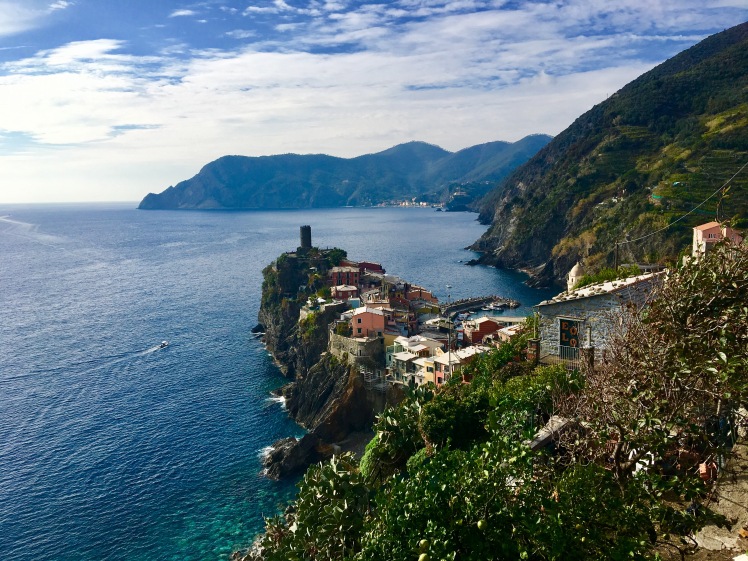 On arriving in Vernazza I stopped at a bar with an amazing view over the rooftops of the village. I sat there for half an hour or so, sipping on my freshly squeezed orange and lemon juice, looking out over the perfect sea. I wandered down through the village and up the castle tower where I also stayed a while admiring the view from another angle. It was also impossible to go back down the steps while people were walking up them, so I was effectively trapped! 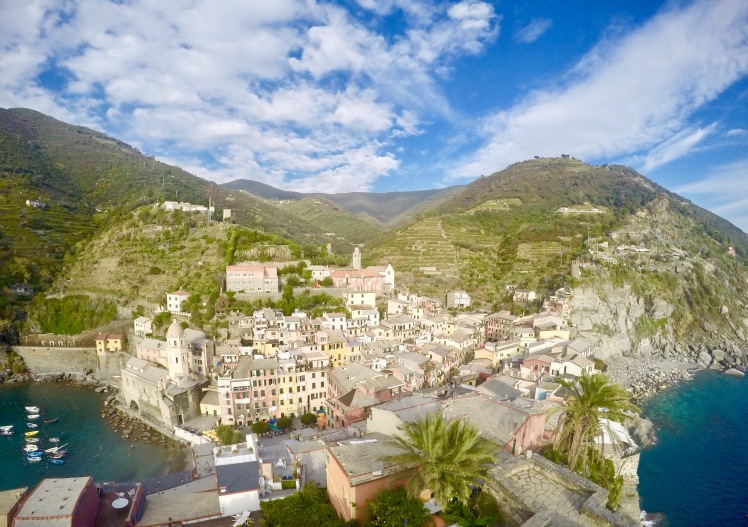 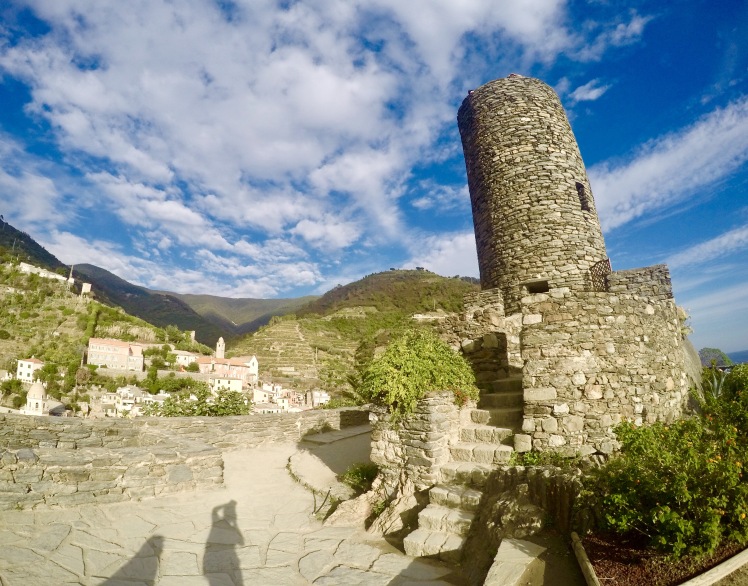 When I finally escaped I bought a focaccia and a beer and sat on the pier watching the boats come and go while people played on the beach. I laid in the warm sun just enjoying the relaxed atmosphere, no one was in a hurry. I eventually walked to the station and took the train to Monterosso where I walked along the best beach in the Cinque Terre, dipping my feet in the sea again.

I decided to venture back to my favourite of the five villages, Manarola, to watch the sunset. I bought another beer and walked down to the harbour where I sat until the sun had disappeared below the horizon. The low evening sun cast a beautiful light over the colourful buildings in Manarola. It looked absolutely magical and I couldn’t tear myself away. 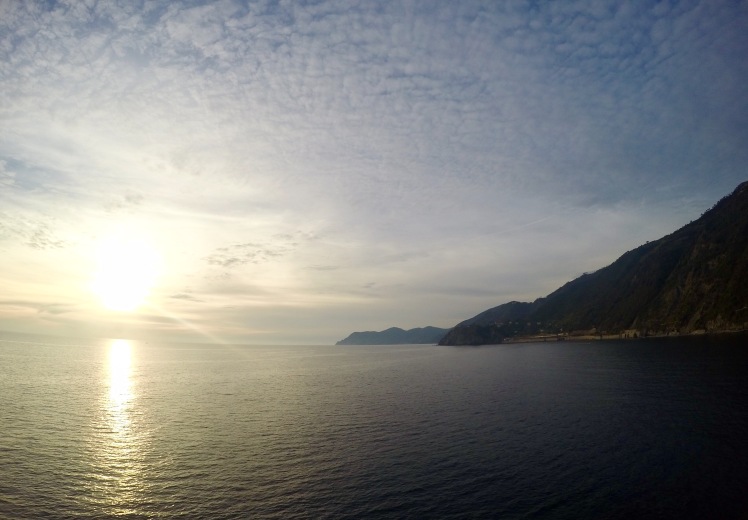 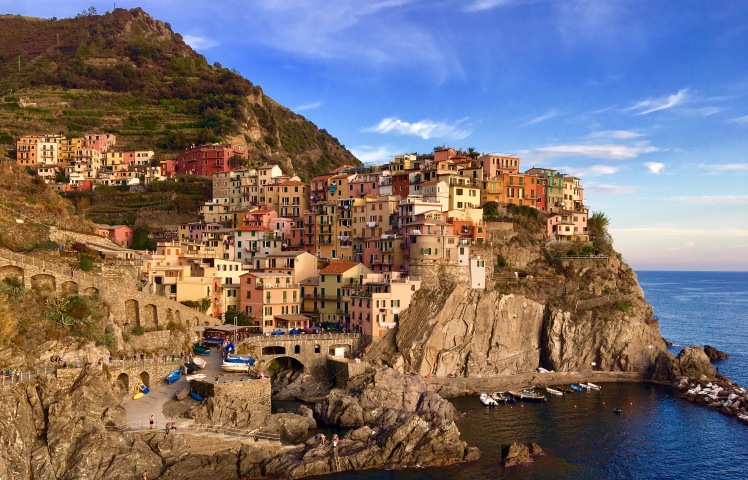 The next day I woke up to rain. Time to move on and think about how lucky I was to have visited the day before 🙂